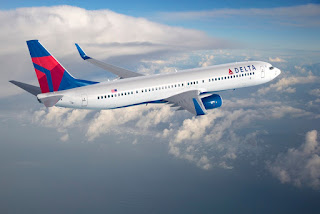 Delta has had an interesting August.  By the time Teresa and I flew to Denver on the 13th, all seemed to be in order, but the week before was a bit trying, for both the company and travelers.  The thousands of cancelled flights have been blamed on a computer outage due to a power module malfunction.  We may never know if this was simply technical failure, or something more sinister.  We are glad though, to have Delta flying again.

Brazil appeared to be financially healthy when it was awarded the Olympic Games, in October 2009.  It has descended into economic instability since (to be polite).  Airbnb has given the Brazilian economy a shot in the arm.  Airbnb estimates that hosts will collect $25 million during the Olympics, from those who choose to bunk in, rather than stay in a hotel.

According to CNN, Twitter has suspended 235,000 accounts associated with terrorism in the last six months, as it works to combat the spread of propaganda by terrorist organizations such as ISIS. Twitter is using a combination of spam-fighting tools, abuse review teams, and partnerships with other organizations, in its efforts.

We have long been fans of Judge Learned Hand.  Judge Hand, who lived from 1872 to 1961, and served on the bench off and on from 1909 until the 1940’s, was a first rate orator and writer, and imminently quotable.  One of our favorite quotes from Judge Hand, in paraphrase, is that “tax evasion is against the law, and should be punished, while tax avoidance is the right, duty, and obligation of every citizen”.  We concur.  To that end, a summary of the candidate’s tax plans.  Trump this week, Clinton next week.

Trump’s ideal tax plan would 1) keep federal revenue stable and growing, 2) include some supply side juice, as in tax benefits that induce capital formation, investment, and hiring, and 3) lower the tax bill for middle income households.  Combining these three objectives into one tax plan is quite the challenge.

The current Trump plan would include individual income tax brackets of 12%, 25%, and 33%, compared to the current seven brackets and a top marginal rate of 39.6%.  His tax plan would quadruple the standard deduction to $25,000 for single filers and $50,000 for joint filers.  This would result in about half the population paying no income tax.

Trump would lower the corporate tax rate to 15%, below the OECD average, which lies somewhere in the mid-twenties.  The revised corporate tax plan also allows full expensing of business investments, instead of the capitalization and amortization over an asset’s useful life, which is current tax law.  This change alone, if enacted, should fuel business growth.  On the downside for business, Trump would eliminate the deferral of taxation of foreign source profits, making them all currently taxable.

Trump’s tax plan will be of special interest to those of you who have an ownership interest in privately held firms, such that company results flow to your personal return, and who can allocate cash flow based to some extent on tax characteristics.  Under the Trump plan, distribution of profits would be taxed at 15%, even though the net business income flows through to your personal return.  Seems to me a powerful incentive to reduce wages, and increase distributions.

At the household level, the Trump plan would expand the tax break for child care expenses, with a goal of making all child care costs tax-deductible.  This would probably have the effect of increasing private school enrollment (and tuition).  He would also do away with the estate, or death tax, and repeal the 3.8% net investment income tax.  There is more, though his tax plan resembles a personal tax wish list for the Donald.
Quotes of the week:

“There is no worse tyranny than to force a man to pay for what he does not want merely because you think it would be good for him.”
Robert Heinlein

“We contend that for a nation to try to tax itself into prosperity is like a man standing in a bucket, and trying to lift himself up by the handle.”

Randy
Centurion Advisory Group was founded to offer clients a place to focus on the integration of life, money, and purpose. Our focus is on offering advice, planning, and investment management services in a way that allows clients to feel as if they have mastered the use of money, have the freedom to enjoy life, and the desire to live with purpose. As a professional services firm, we are paid solely by clients, and receive no compensation from product sales or product vendors. The professionals who are part of the CAG team help families build, maintain, and transfer wealth, consistent with the family's goals.